Alyssa Milano has a reputation for using her voice to affect change. She was one of the most vocal celebrities behind the #MeToo movement, empowering women to speak out against sexual harassment, and has since become a powerful political activist. But Alyssa Milano’s new children’s book, Hope: Project Middle School, while written by her, actually relies on a different kind of voice: the voice of a girl trying to make her way through middle school. And perhaps that is the most powerful way of all to really encapsulate that specific experience so many of us remember trying to navigate.

Earlier this week, Milano released her new book Hope: Project Middle School, which tells the tale of 11-year-old girl Hope who is just entering middle school. Hope has a best friend named Sam, dreams of being an astrophysicist, and loves her two rescue dogs. So in other words, Hope is exactly the kind of 11-year-old girl all grown women wish they could be right now. As she heads into middle school, she has to start dealing with difficult and relatable issues like shifting friendship dynamics, some hints of sexism in the science club, and even the whiff of a potential mean girl situation with her new classmate Camila.

Fortunately, it looks like Hope is a young activist in the making and plans to change the world. So don’t worry too much about her.

Not only can kids change the world – they will. 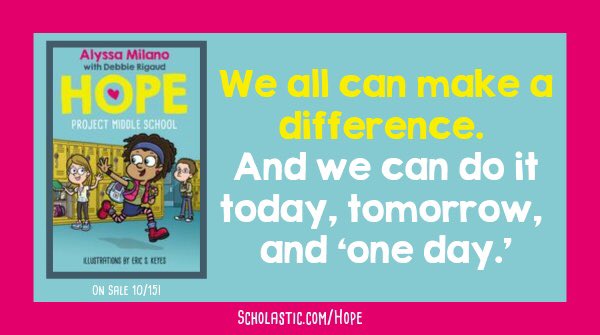 178 people are talking about this

Milano opened up about her new book on The View recently, explaining to guest host Chelsea Clinton (who is herself a children’s book author with several titles under her belt) that she wanted to focus her story on middle school because it’s an “age we never really talk about.”

“I think that children have the most innate ability to be compassionate and empathetic,” Milano told Clinton, according to ABC News. “They just do it, it’s part of their nature. It’s part of who they are. And somewhere along the lines, maybe it’s middle school where everything becomes very much about your own personal growth and ‘What do people think about me?,’ we lose that. And you learn hate. And you learn the ugliness of people.”

She went on to explain that ultimately she wanted to use this book as a platform to teach kids to use their own voices.

Milano is a mom herself to two children with husband David Bugliari, 7-year-old son Milo and 4-year-old daughter Elizabella. While the two kids might be a little too young yet to fully grasp Hope’s story, Milano’s husband still took them out to purchase copies of their mom’s book on Wednesday. An event she shared on Instagram with the caption: “While in NY on my book tour for HOPE: Project Middle School, my sweet husband took the kids to buy the book. And now I am crying. I’m so glad I can give them this. I am so proud to be their mama.”

Alyssa Milano is right, of course; middle school can be particularly harrowing. It’s a time when kids are struggling to figure out their own identity, develop friendships, and learn to be more independent all at once. Here’s hoping Hope inspires kids to find their way.

All articles by: admin

2021 © All rights reserved. Powered with by CL Web Studios.